Baños – At the end of the world 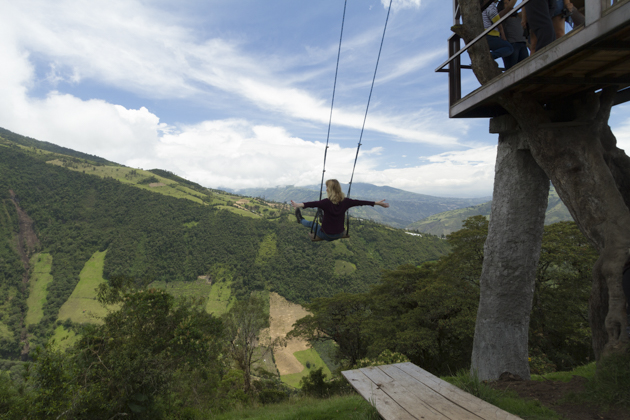 (The following is a guest post by Vibeke Johannessen,  from The Viking Abroad)

You have probably seen pictures of the swing at the end of the world.  That swing is in Baños, Ecuador. Did you know that Baños is named after the hot spring water baths? The full name of the city in spanish is Baños de Agua Santa or Holy Water Baths. In the last few of years this city got famous because of the Casa Del Arbol Swing. Baños can be considered the entrance to the Amazon. You will notice this by the lush landscape.

The swing can look terrifying and you might think it would be a big risk to take it, right? Don’t worry, you won’t fall of the earth!

If you decide to take the swing on a clear day you might get to see volcano Tungurahua, which is currently active. Casa Del Arbol means the Tree House and it used to be a tower where some workers were watching for fires and eruptions from the volcano. 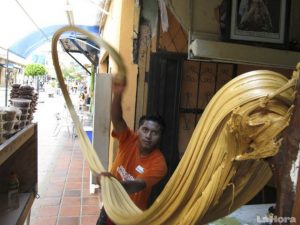 When you are in Baños you should make time to walk around in the morning. You will see how they make the delicious candy called Melcocha, which they make by throwing it and twisting it around a stick. 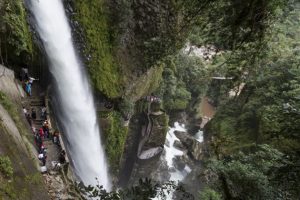 Baños is also known for its beautiful waterfalls. You can do a tour with a Chiva, which is an open party truck. The tour is called Ruta De Las Cascadas where you can see the biggest one called Pailon Del Diablo. If you are a real adventurer you can also do canopy over the river before you get to Pailon Del Diablo, there are also a few options for bungy jump.

Where to stay in Baños

There are plenty of hotels and hostels in Baños. You can either stay at a cheap hostel or you can make the most out of your trip and choose a luxury hotel with hot-springs. Here are some options I have tested out and they have great reviews on TripAdvisor/Hostelbookers.
Cheap: Great hostels Backpackers, La Casa Verde or Hostal Chiminea.
Luxury: Samari Spa Resort or Luna Runtun.

Car: If you have an internet enabled smartphone, you should use the Waze APP and type in Baños, Tungurahua. The drive takes around 3 hours. You can also stop in the beautiful town called Ambato, where they sell amazing bread.

Baños is very safe and you shouldn’t worry about walking around the city at night. Tourism is very important for the community of Baños and the people will do everything to keep their visitors safe and happy. 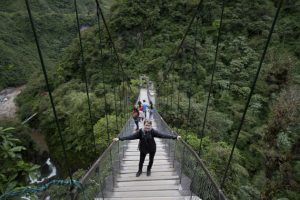 Do I need to book everything before I arrive?

You don’t need to book anything else than hotel or hostel before you arrive in Baños. To get to Casa Del Arbol you only need to get the right bus and the ticket will be only $1. The hotel or hostel will know all the information on where to find the bus. The entrance to the swing will also cost $1. You can take the swing as many time as you want, but be aware it could be a line.

If you want to do the Rutas de las Cascadas you will find many travel agencies in the center of Baños and near the bus station. If you have more time to travel around you can also book trips to the Amazon to places like Puyo, Cuyabeno or Yasuni and leave straight from Baños.

Have you been to Baños? Would you dare taking the Casa Del Arbol swing? Let me know in the comments below and don’t forget to follow The Viking Abroad for more tips on travelling the world. 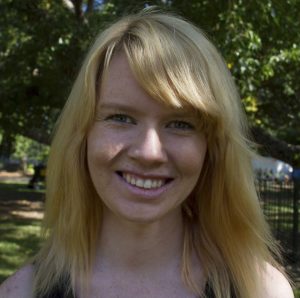 Vibeke Johannessen is behind The Viking Abroad.

She is a Norweign who loves to travel. Following meeting her Ecuadorian boyfriend, she has made Ecuador her base for the next few years. Her blog has some really great tips about Ecuador, but she also blog about destinations she has been to all over the world.