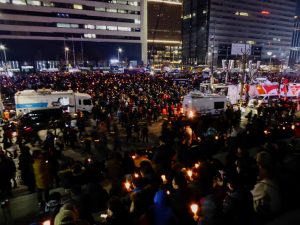 I happened to be in Seoul on the sixth Saturday that protesters took to the streets since their initial protest on 26th October 2016. Amongst the political talks were musical acts and street food stands. There was a sense of peace in there air, even the police were friendly as they went about doing their job. 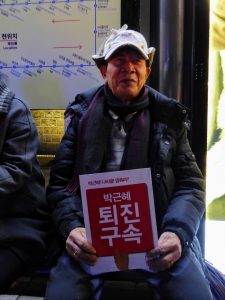 What are the Seoul protests about?

President Park Geun-hye has admitted that she shared classified information with someone who lacked the necessary security clearance, Choi Soom-sil. Choi has known president Park since the 1970’s and it is said that she used her influence over the President for a multi-million dollar peddling scandal. Therefore, the people of Korea want President Park to step down by staging Seoul protests. 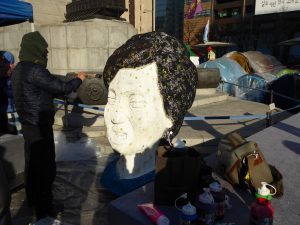 There has been growing frustration about the President over the past few years following a number of other incidences. A major one of which is the sinking of the Sewell Ferry killing over 300 people, mostly children on a school trip. Since the Seoul protests, impeachment has been instigated and a decision will be made in 60 days about her future. No South Korean president has ever failed to finish their five year term.

Looking for things to do in Seoul? Check out the 10 free things that I recommend.

Approximately 1.7 million people took part in this particular protest with candles on the streets of Seoul.
The worst behaviour we saw was stickers being stuck on the police vans parked by the side of the road. 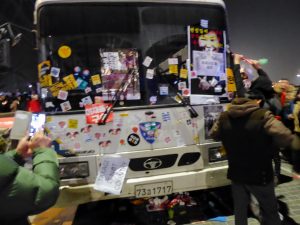 Here is my video documenting this occasion. So many other people need to take the gentle approach of the South Koreans rather than carrying out acts of violence to get their voices heard.

Within the protest area, tents have occupied Gwanghwamun Square for two years following the Sewol Ferry disaster. Although the ferry sinking is mostly blamed on the ship’s overloading and poor rescue procedures, it has exposed further problems within the government and its corruption. There is outrage that more of the 476 people on board could not be saved as 304 passengers died when the ferry sank on the 16th April 2014. 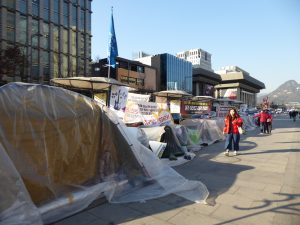 The area was first occupied by tents just a few months after this when the families of the dead were refused an audience with President Park. Although most of the bereaved families no longer stay here overnight, they do come to the area daily where there is a memorial to those who lost their life.

Most of the dead were school children who were on a school trip. Disturbing stories are told about children attending their classes the next day to find they were the only person alive as they had not attended their school trip. A memorial is in place showing photos of the dead and there is also a volunteer hut where signatures are collected demanding that the full truth be revealed. There is also an area where they make the yellow ribbons, in memory of those who lost their life. 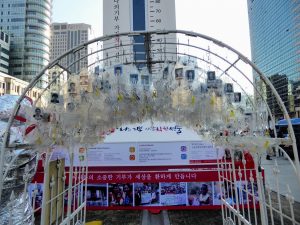 We were lucky enough to spend a few hours on the Thursday before the protest, volunteering to help make the yellow ribbons. Here we sat on the floor around a low table, gluing and attaching chains whilst talking to locals and sharing food with them. These ribbons are given out for free to anyone who wants one and, with a large influx of people in the city due, they needed plenty. 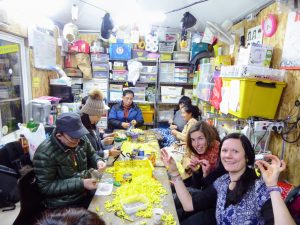 To witness the sense of community in the area was amazing and how, over two years on, the victims have not been forgotten.

What do you think about the Seoul protests? How does this protest differ from other countries? Please comment below. Don’t forget to subscribe (It’s free!) to my blog for more  posts like this and interesting travel tips.